Support schemes for biogas and biomethane in Flanders 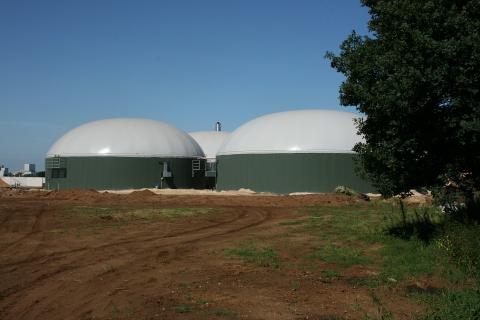 Environment and (renewable) energy are regional competences. Hence, subsidies for biogas projects are regulated and decided on a regional level. This means that the system described in the following is only applicable to Flanders and not to the other two Belgian regions of Brussels and Wallonia.

As of 2022, biogas plants in Flanders can apply for financial support from the following institutions:

Subsidies from the Flemish Energy and Climate Agency (VEKA)

As of 2022, the Flemish Energy and Climate Agency gives two kinds of financial subsidies: operational subsidies in the form of certificates for green electricity and primary energy savings as well as investment subsidies. Only newly built projects can apply for these subsidies.

The certificates can be either sold to the distribution network operator for a predefined minimum price or to electricity suppliers for the price negotiated between the electricity producer and the supplier.

In fall 2019 the newly formed Flemish government announced to gradually decrease this form of subsidy and abolish it completely by 2025 (for renewable electricity) and 2030 (for cogeneration).

Since 2013 producers of electricity from biogas receive GSC based on the net produced renewable electricity (EGSC), expressed in MWh, and the bandingfactor (Bf). The bandingfactor is determined by the start date of the plant, the input material the biogas is produced from and the capacity of the engine used to produce electricity.

Eanc: energy required for the ancillary services of the electricity production, e.g. the cooling circuit of a combustion engine

Epre: energy required for the pretreatment of the feedstock

Etrp: energy required for the transport of foreign feedstock up to the border of Flanders

Overview of the final GSC-bandingfactors since January 2019

1start date: submission date of the application for the operational subsidy.

New biogas installations, starting from 2021, will not receive GSC for the electricity produced during periods when the day-ahead prices on the Belgian spot market are negative for at least six consecutive hours. With this measure the Flemish government wants to stimulate the flexible production of electricity.

GSC can be sold either:

While GSC are awarded to renewable fuels only, certificates for primary energy savings (WKC) are awarded to combined heat and power (CHP) units run on fossil fuels as well. In this scheme it is not the generation of energy that is subsidized, but the fuel (expressed in MWh) saved by using a CHP unit compared to the fuel that would have been necessary for the separate generation of the same amount of heat (e.g. boiler) or electricity (e.g. electric power station). Basically the efficiency of the CHP unit is being rewarded. The subsidy is based on the fuel that was saved due to that increased efficiency.

Overview of the final WKC-bandingfactors since January 2019

New biogas installations, starting from 2021, will not receive WKC during periods when the day-ahead prices on the Belgian spot market are negative for at least six consecutive hours. With this measure the Flemish government wants to stimulate the flexible production of electricity.

WKC can be sold either:

Biogas plants with so called micro-CHP units can apply for this investment subsidy since 2018. It has been created because the administrative burden was deemed too high compared to the amount of subsidies such small-scale projects received under the certificate system. In order to be subsidised under this scheme the CHP-unit needs to be ≤ 10 kWe.

The costs related to the purchase and installation of the CHP unit and the digester are eligible, but limited to €4700/kWe. The share of the total costs that can be reimbursed by the subsidy, depends on the size of the enterprise. Only specific CHP-units are subsidised under this programme. The list of eligible technologies is updated periodically.

The call takes place at least once a year and is an investment subsidy for:

Companies investing in the production of green heat with biogas, can apply for an investement subsidy if the project is not eligble for the certificate system. The maximum amount per green heat project is €1,000,000. Under this call SMEs receive more support than large enterprises as well (the same percentages apply as in previous table).

Applications are ranked according to cost-efficiency and anticipated CO2 reduction-efficiency (-CO2kg/€). The highest ranking application receives the amount it applied for. The remaining budget (in case there is any), is then awarded to the following rank and so on. At least one project, or if multiple projects applied, 10% of the lowest scoring projects are eliminated from the granting process. Per year one to two calls are launched.

Subsidies from the Department of Agriculture and Fisheries

Under this scheme the anaerobic digester itself is not subsidised, but peripheral equipment such as pumps or storage tanks for the digestate, etc. are subsidised. This subsidy operates with a list of eligible technologies which is updated every three months.

Subsidies for innovative projects in farming

Innovative projects that use technology that is not proven yet (and therefore not on the list of the list of eligible technology of the VLIF-investment subsidy) can apply for a 40% subsidy on the initial investment. The subsidy is capped with €200,000.

Subsidies from the Public Waste Agency of Flanders (OVAM)

Local authorities can also receive 20% on their net investment (with an annual maximum of €1.5 million) for anaerobic digestion plants for organic waste from the Public Waste Agency of Flanders (OVAM).

Investment deductions are available on profit made from investments on energy-saving measures. Depending on the specific circumstances the tax cuts can range from 3.5% to 20.5%. The aim is to increase efficiency on existing plants and to promote the use of renewable energy sources in general. This can be combined with all the aforementioned subsidies.

As finance is a federal competence, this is the only support mentioned in the presented overview that applies to the Brussels-Capital Region and the Walloon Region as well.

Support from the Flemish Agency for Innovation and Entrepreneurship (Vlaio)

The Flemish government awards companies who invest in climate-friendly technologies. Biogas produced from biomass or waste water is included on the limitative technology list which entitles to an investement support. The biogas has to be used for the production of process heat and not for the production of electricity. Only installed capacities of less than 1 MW biogas are elegible. SMEs receive up to 55% of the invesment, large companies a maximum of 45%.

Biogas-E is happy to answer any further questions and provide additional information upon request (info@biogas-e.be).